A downloadable game for Windows, macOS, and Linux

Rifty has crash-landed on a far away mining planet... When wandering around, she found a hyperdrive-research facility, but she could not open it's main door. She switched on an SOS radio signal device. A few minutes after the first warning signal, D-10 booted up to investigate the problem. D-10 found that all of the worker robots have been hacked by aliens, so the malfunctioning robots have to be eliminated! When finished, the main door can be opened and Rifty can be rescued.

There are no individual loot-pick-ups, if you destroy an enemy robot, some of its ammo and health will be automatically added to your robot.

Alien Contact game is in active development and will include further features, bugfixes and more levels. The game time is currently somewhat short, but will be longer in the upcoming future updates.

Windows, Linux or Mac and a 3D graphics card (the game engine is lightweight and fast).

Please donate if you like to support the development of this game, thank you very much.

can improve for GLES2 drivers?, can´t open the game for that

so at the actual stituation I do not plan to improve for GLES2, but if there will be a good demand from customers for gles2 then yes

This is just the Godot TPS demo.

No, this is not just the demo.

Altough Godot TPS demo has pretty cool  graphics iself, but  it is just  only a graphical demo of the engine. So there is no backgound story, no player stats and no level finishing goal in the demo.

In the current version of Alien Contact game (v0.1) there is already a backgound story with a nice intro video created by me (you can see the original  video here:

this is a sci-fi fan made video, this was the basis of the game intro video).

Also the player has stats: health plus ammo (also I have created the hud bars for visual of the stats based on godot engine programming tutorials on youtube, there are plenty of tutorials out there) and the programming part: when player dies it will end level and back to tilte screen. Also I have programmed the part when the enemy robots explodes then the player gains more health and ammo.

And finally the level can be now completed when all of the enemy robots are eliminated (this is also not there in the original demo).

So the work has just been started, there are lot of things to be done (e.g. more levels, more types of enemies) and I am also planning a nice customization of your player robot at the beginning of the game (visual and  in attributes too like weapon damage amount and ammo related  parts). I am working on new levels and new items too.

I would like to have some kind of crafting system too, but it needs more time to fit into the level design and also the implementation.

I don't mean to be rude, you seem like you're just having fun, but I wouldn't really call it original until it has more of your own content.

Sure, no problem here of course, thank you for your comment. My plan is to develop this demo to a full playable game and also as you have noted having some fun while learning the game development :-)

Amazing use of  the godot engine. I would love to see how much more you will create with this.

Thank you for your comment, more and more new features will be added to this in the future some will be surely based on the community feedbacks. 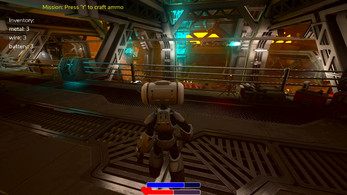 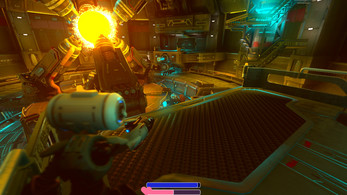 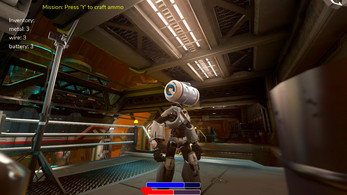